New Hampshire native, Kim LaMontagne suffered in silence for years with mental illness in her workplace. Now she’s created a training program to teach leaders how to recognize, destigmatize and reach out to employees. 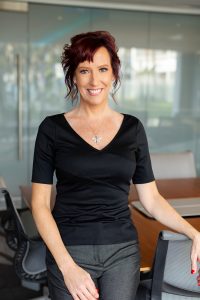 SARASOTA, Fla. (May, 2021) – Rock bottom for Kim LaMontagne was when she passed out after celebrating the win of the ‘Directors Choice’ award at a corporate sales summit, and then slept through the hotel fire alarm. It only got worse from there.

“My life actually got worse when I got sober,” says LaMontagne, creator of The 4 Pillars of Creating and Sustaining a Mentally Healthy Workplace Culture. “It’s like having an open wound that no longer has a band aid. That band aid was alcohol. Without it, I went into a deep, dark depression because even though I was getting healthy, I was afraid to talk about it – especially at work.”

On the outside she was a high-performing employee, number one, two, or three on the sales leaderboard. On the inside “I felt inadequate, like an imposter, ashamed because I couldn’t control my drinking,” she says, and I didn’t tell anyone at work for fear of being judged or getting fired. “So I stayed silent, which was toxic, and almost killed me.”

LaMontagne suffered quietly for seven years with depression, anxiety and intense suicidal thoughts until one day her boss, noticing something wasn’t right, pulled her aside and asked her to be honest about how she was feeling. “She created a safe space and gave me permission to speak openly,” says LaMontagne. “Once I spoke my truth I started to heal.”

Now LaMontagne is teaching leaders to do what hers did, “to see the signs and take action,” via her corporate training, The 4 Pillars of Creating and Sustaining a Mentally Healthy Workplace Culture, which is available in three formats: live/onsite, virtually and on demand.

It’s not about learning to be counselors, she says, it’s about starting a conversation. It’s saying ‘I may not fully understand what you’re going through but I am your leader and I’ve been trained, and we have the resources to help.’

The main goal of the 4 Pillars is to teach leaders not to be afraid of mental illness. “It’s the same as physical illness. It’s just heavily stigmatized. But we can change that,” says LaMontagne.

“It’s not just about human life. It’s also about a company’s bottom line. Employees who are suffering in silence with mental illness are producing at less than stellar levels. The healthier our employees are – the healthier our organization is.”

This past year has put an unprecedented strain on everyone’s mental health. At the same time the silver lining is “the pandemic has brought mental illness to the forefront enabling people to share their struggles, speak openly, and support one another,” says LaMontagne.

Employees are returning to the office, and a new mental-health savvy generation is entering the workforce. They not only want mental health resources and open conversations, they expect them. CEOS, directors and leaders need to be ready to welcome them with open arms – and minds. Mental health advocate, and former Chief Justice of the New Hampshire Supreme Court, John Broderick agrees, and says, “Kim LaMontagne’s 4 Pillars program needs to be in every workplace around the globe.”

Kim LaMontagne, MBA, is an international speaker, trainer and mental health in the workplace expert and advocate. She is a teacher and state trainer with the National Alliance on Mental Illness, a member of the Dartmouth-Hitchcock Campaign to Combat Behavioral Health Stigma and Discrimination and a regular contributor on the topic of mental health for Show Me Your Stethoscope, a Facebook group of 640,000 nurses and healthcare professionals. She is also the author of “It’s Ok to Not Be Ok,” and a contributing author of “The Strength of our Anchors.” A complimentary training consultation can be scheduled at kimlamontagne.net or by email at info@kimlamontagne.net.